Most girls always feel frustrated when they don’t know where they stand with a guy. Sometimes, you might think that you’re harboring one-sided feelings, and you wish that if only you’ll find some ways to figure out whether a guy loves you back. Of course, we have ways to help you find out if a guy is crushing on you. When a guy has a crush on you, he always says these words;

When a Guy Has a Crush on You, He Always Says These Words (20 Words) 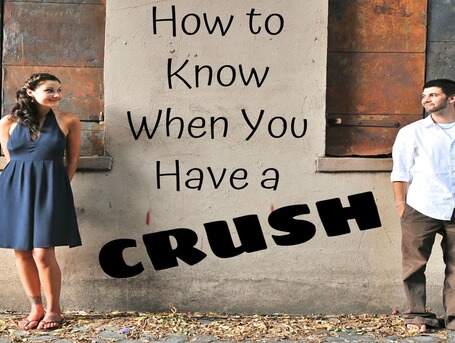 There’s always the general notion that guys will say or even do anything to get a lady. Well, you can’t be blamed for having that mindset. However, one thing is sure, those words they say to you are far from meaningless.

A guy can tell you words in such a way that you get to know clearly how he feels about you (he can do this consciously or unconsciously). Read on to find out different phrases men use to expose their romantic feelings.

A lot of girls are not exactly interested in late-night WYD texts. Yet, once a guy can successfully clearly state his sentiment, it is a sign that he has truly developed a soft spot on the girl he’s conversing with. After all, anyone who likes you, irrespective of gender, will be keen to hear about your life.

However, the very first thing he’ll initially begin with before he starts becoming more comfortable with you is, ‘What are you up to?’

The phrase, ‘Can I join you?’ is very popular among many girls, especially in their DMs. Once a girl has publicly said something like her intention of sleeping in or taking a shower, the first response she’ll be expecting from most men is the phrase above or to make it a more formal, ‘Do you need company?’

However, you might be getting it all wrong as that could not be his actual intention. You have to think outside the box that once a man uses that phrase, he intends to be a part of your plans. In other words, he is trying to spend more time with you. Yet, his mind might as well not be very far from the desires that were formerly noted.

This is a phrase a guy uses when he has a crush on you, even though you’re just friends with him or you both belong in the same friend group. And so, he might be using those words to plan out solo hangouts or dates with him. That shows he might be missing in your absence. You can just try teasing him a little by asking him why he wants a hangout with just you, and that will force him to make clear his intentions.

Ask any guy that loves a girl what his desires are, and most will tell you, they wish to be with the girl he loves, or at least stay close to her. Realistically, you wouldn’t be expecting him to ask if he can sit close to you, but may just feel that he’s obligated to sit next to you. Therefore, it’s for you to decide whether to perish such an idea or allow him to be glued to you.

This particular phrase is an obvious sign that a guy is looking for every means to touch you. Sometimes, during the hug, he might try to make it warmer, delay it or brush against you. It’s a clear indicator that he might be crushing on you.

When a man is crushing on a girl, he finds whatever the girl says very funny. ‘You are hilarious’ is a phrase that shows that a girl is walking a thin rope between a man crushing on her and seeing the man as one of the men. However, once he’s not stating to you directly how hilarious you are, but to others, then be rest assured he’s crushing on you.

Whenever a man tells you that ‘you are the only person that understands him better,’ it might be that he’s crushing on you. After all, that kind of feeling always develops into an affair.

If you meet any guy that suddenly tells you most secrets that he hasn’t been able to tell any other person, that’s a clear sign that you have a grip on him. He’s not only crushing on you but also falling for you.

This question is often seen as a friendly or kind gesture to someone. However, whenever a guy starts showing deep concern about your mental health, it shows that he values you so much. He’s not only physically attracted to you but also genuinely cares about how you’re faring.

Every man will ask after your welfare and how you are doing, but it takes only a man that is crushing on you or having some sort of feeling for you to offer support whenever you need them.

In most scenarios, this gesture is often taken as being kind and gentle, especially if he has an extra layer and you don’t. However, most guys that give their hoodies to a lady and cover her up with it when they’re cold, especially if there are other women around that are facing the same cold issues might be crushing on her.

The same applies to offering to borrow several other things. Most importantly, he is aware that you will have to look for him to give it back, thus, offering him another chance to see you again.

During the early periods of your relationship, your man will always use familiar playground methods of using mild insults on you. But don’t let that bother you. Even if he says you’re annoying, it could mean that he’s always thinking about you, except in cases where you’ve become intolerable.

Once a man starts crushing on you, he’ll start finding it difficult to hold back his compliments for you. He can begin with complementing your hairstyle or dressing. These speeches are often created to test the waters before he goes ahead to expose his actual feelings.

Once a guy sees your smile or even the way you laugh, he might take so much time staring at your lips. What on earth would make him do that if he doesn’t have a crush on you?

This might be taken as a more common complement to just about everyone beautiful by everyone, irrespective of gender. However, most guys that comment on women’s appearance might be crushing on them. However, if you discover that he’s doing it to other women, he might be a player. But, even at that, players also develop crushes.

This point doesn’t need much stressing, as it is one of the more obvious signs of guys having a crush on their opposite sex. If he uses this phrase, it is very close to saying ‘you’re not like other girls.’ However, he might be saying it as a way to reveal his honest feelings for you.

Quite simply, a guy that doesn’t have any atom of feelings for you will not even make the mistake of telling you that, even if he’s a player (even players are careful of what they say to a girl). He’s trying to use this phrase to tell you that it’s his dream to date or marry you. You may hear something like ‘assuming you were my girl, you’ll be getting flowers from me every day.’ It’s an obvious sign of feelings he has for you, isn’t it?

Are You Seeing Anyone?

This is a clear sign of jealousy even if nothing is existing between you both yet. It shows he is crushing on you and to indirectly know if you’re available to date him.

A guy that asks for your number sure has something up his sleeves. Even if he initially begins with asking for your Instagram, Twitter, or TikTok account, he aims to get in touch with you more often.

Any man that wants you to tell him more about yourself wants something to happen about you both. As such, he needs to know what your lifestyle is like and maybe plan to get used to them. It might be something about your favorite music, hobbies, and even home life. Whichever it is, as long as he’s asking after all these when you’re both conversing, he might be crushing.

Most times, it’s difficult to tell when a guy has a crush on you, especially considering that some of them might be fighting hard to hide it. However, the more their feelings grow, they would no longer be able to control them and will be forced to let it out against their will. It will start with the phrases above, which are obvious indicators of their soft spot for you.

Meanwhile, men hate it when you take advantage of their feelings or take it for granted, especially when they have inadvertently or consciously decided to let it out. Even if you don’t want to reciprocate, you can still play it cool by gently letting them know of your stance, rather than approaching it offensively. Remember, ‘LOVE is a beautiful thing’.